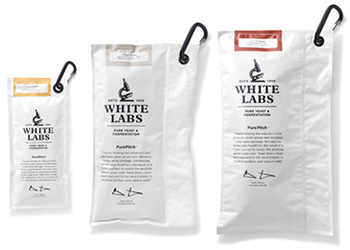 White Labs began through friendships in the San Diego region in the mid-1990s. The ﬁrst store to carry White Labs yeast was Home Brew Mart, in the Linda Vista area of San Diego. They carried one strain, WLP001 California Ale Yeast, for 3 years, selling out every week within 3 days. Today, although making yeast for commercial users is White Labs’ #1 business by volume, the homebrew and hobby market is still a primary focus and the engine that drives yeast production on a weekly basis. More than 70 strains are made weekly for homebrewers. White Labs began with one strain in one store, but now regardless of the hobby – beer, wine, cider, and more – there is a White Labs strain to help and a store that will carry it.

White Labs Pitchable Yeast is packaged with 70 to 140 billion yeast cells, which corresponds approximately to a 1-2 liter size starter. Lag times are typically between 12-24 hours for a normal strength brew.

A yeast starter is used to initiate cell activity or increase the cell count before using it to make your beer. The yeast will grow in this smaller volume, usually for 1-2 days, which then can be added to 5 gallons of wort.

While a starter is not always necessary, White Labs recommends making a starter if the  Original Gravity is over 1.070, if the yeast is past its "Best Before" date, if you are pitching lager yeast at temperatures below 65F, or if a faster start is desired.

Procedure for Making a Yeast Starter

In a medium sauce pan, add 2 pints of water and 1/2 cup Dried Malt Extract (DME).  Mix well and boil the solution for about 10 minutes to sterilize. Cover and cool the pan to room temperature in an ice bath.  This will give you a wort of approximately 1.040 OG.  Keeping the Original Gravity low is important because you want to keep the yeast in its growth phase, rather than its fermentation phase.  The fermentation phase will create alcohol which can be toxic to yeast in high concentrations.

Pour the wort into a sanitized glass container (flask, growler, etc.) and pitch the vial of yeast.  Cover the top of the container with a sanitized piece of aluminum foil so that it is flush with the container, but will still allow CO2 to escape.  Vigorously shake or swirl the container to get as much oxygen dissolved in the solution as possible.  Keep the starter at room temperature for 12-18 hours on a magnetic stir plate, or occasionally shaking it to keep the solution aerated.

You probably won’t see any visible activity, but the yeast is busy taking up the oxygen and sugars in the solution and growing new cells.  After 18 hours, the yeast will have consumed all of the nutrients and oxygen in the starter.  Switch off the stir plate or discontinue shaking and it will form a milky white layer on the bottom of the container as the yeast flocculates.  If you are not planning on pitching the yeast right away, you can store it in the refrigerator with the foil still in place.

When you are ready to brew, decant off most (80%) of the clear liquid from the top, being careful not to disturb the yeast layer below.  Once the yeast and your wort are at approximately the same  temperature, rouse the starter yeast into suspension with the remaining malt solution and pitch the yeast slurry into your wort.

Using a stir plate can greatly increase yeast growth in a lesser amount of time.

We don't suggest ordering liquid yeast during the summer months if you are in a shipping zone outside 1 day delivery. Though we ship with a complimentary ice pack it's not likely the yeast will remain cool for any length time. Warm temperatures can and most likely will affect yeast viability. In the case that the yeast does become warm for extended periods, refer to the yeast starter procedure above.